The face of the SWF Eliza Haze has had some tough battles before but she has never had to face someone as dominant as Skylar Slice. Since winning the SWF championship Skylar has dominated the competition. Eliza looks to put a stop to that…. Eliza gives Skylar the fight of her career and plans one leaving Tennessee with the title around her waste… Skylar has other plans. The two best that the SWF has to offer pull out all the stops! You don’t want to miss this one! (Pre-match interviews. Lockup. Side Headlock. Armbar takedown. Pinning arm with knee and adding leg lock. Armbar. Snapmare. Vicious kicks to back. Leg Drop. Clothesline. Hip Toss takedown. Big body splash in corner. Backbreaker. Bending back over knee. Knee planted in back with double arm bar. Double clothesline. Exchanging big right hands. Flatliner. Finisher: Power bomb. pin.)

There are no reviews yet.

Be the first to review “00587: Eliza Haze vs. Skylar Slice” Cancel reply

Most Popular
Tweets by libertyproww 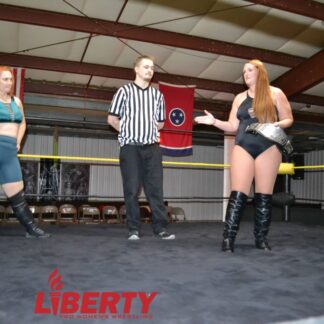